It’s finally time to make this car move. You’re going to talk to the motors!

This code reads from three sensors and sounds the buzzer when they are triggered. It reads from and writes to the GPIO using pigpio. Now, you’re going to use this library (and the daemon process it communicates with) to drive the four motors.

Unlike the buzzer, running a motor isn’t a matter of setting a corresponding GPIO pin to high. There’s a bit more to it.

Let’s take a look at the pins we need to use. The complete diagram is here. (I fixed the link.)

We’re concerned with these pins.

Instead of pins for forward and backward, you’ve got four pins marked PWM, and pins named Latch, Clock, and Data.

There are two steps to driving a motor:

First, you need to send a Pulse Width Modulated (PWM) signal to each of those PWM pins. This signal controls how fast the motor spins. So, in return for doing a little extra work, you get more control over your robot.

Second, we have four motors. Each motor can go in two directions. Rather than consume two additional pins for each motor, this robot has a motor controller card that requires a sequence of bits that tells it which direction to spin each motor. By sending the correct combination of bits, you control all of the motors with one instruction.

Let’s work this out step-by-step.

You can think of Pulse width modulation (PWM) as switching the power to a GPIO pin on and off. How quickly it’s switched is measured as either the duty cycle or frequency.

You usually graph a PWM signal with time on the horizontal axis and voltage on the vertical and get an easy-to-read square waveform.

For example, a 25% duty cycle means that the voltage is high for 25% or one-quarter of the time. A 50% duty cycle means that the voltage is high for half of the time. 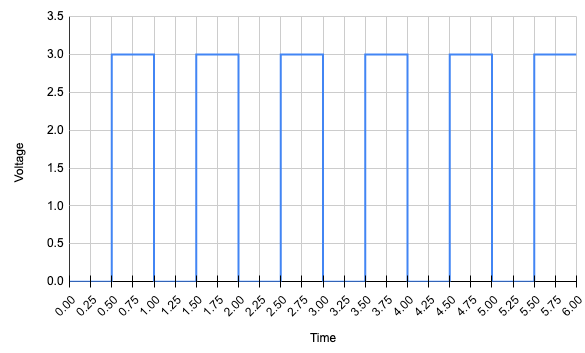 Pigpio makes generating a PWM signal easy since its daemon process will generate it for you. You don’t have to worry about setting a timer and setting and unsetting a pin.

Getting Ready to Drive

Once that’s all working, you’ll want to use the sensors to decide where to go.

It’s time to put the code in a Python object, so it’s easier to keep track of where all the moving parts are and what state they’re in.

This class, primarily because we need to do the same thing for each motor, and there’s only so much you can factor into functions. We’ll tackle it in a few parts.

On lines 6 - 23, there are constant definitions for the pins you’ll be using. As you add more functionality, you’ll add more pins. There’s also a list of constants for duty cycles. You’ll get to them soon.

Line 20 defines a namedtuple called MotorInfo that you’ll use to set a motor’s direction to forward, backward, or stop. If you’re not familiar with namedtuples, you’ll see how they work here.

The init function on line 22 is called every time a new RobotDriver is created.

First, it creates an array named motor_word with eight integers set to zero. You use this to tell the motor controller how to drive the motors.

Next, it creates an array of four MotorInfo namedtuples on lines 26 - 29. Namedtuples are immutable, so as it creates the array it sets each tuple to its final value. You’ll use these in the next section.

When init calls setup_motors, you finally talk to the GPIO.

Line 34 starts a loop that sets all of the motor pins to output. You could do this with a call for each pin on its own, but I like using a loop. It makes it easy to add new pins.

Then, the code sets up PWM for the motors. Pigpio default range for PWM duty cycles is 0 - 255. You can change this to get finer control, but it’s good enough for now.

Back in the initializer, the code wraps up by calling another function with motor_word initializes to all zeroes. Let’s take a close look.

It loops through all the values in motor_word and writes them as high or low to MOTORDATA.

The motors are controlled by writing a set of 8 bits to MOTOR_DATA, one at a time. Each motor has two bits; one that turns in one direction, and one to turn on the other.

This is a common arrangement for motor controllers. You can find C code for driving these motors on the pigpio web site.

That code uses bitwise operators, but rather than explain how they work. I’m using the MotorInfo namedtuple to make the code easier to read.

Here’s the declaration for the MotorInfo again:

This creates a tuple named MotorInfo. It has two fields, forward and backward.

The first entry is initialized with the forward and backward pins for the left front motor—the second, the right front motor, etc.

So, you refer to a motor’s pins by indexing its associated entry in the motors list and then accessing the correct field.

If you want to set a motor direction, you pick the proper MotorInfo and set the correct pin.

This sets the two left motors to forward.

This sets the two right motors to forward.

By setting the correct entries for all four wheels to forward and then writing the word to the controller, the robot will move forward.

Controlling the Motors via Python

So, all that’s left is to add some functions to move the motors in each direction.

So, that leaves you with about 140 lines of code altogether. Here’s a gist you can paste into your Jupyterhub.

It’s a little repetitive and could be factored down, but it’s also very readable and suitable as a beginner’s project.

So, to make your car drive forward, ut this in the next cell.

This was a long one, so time to call it quits.

Next, we’ll use this code with the sensors to get the car to follow a line!